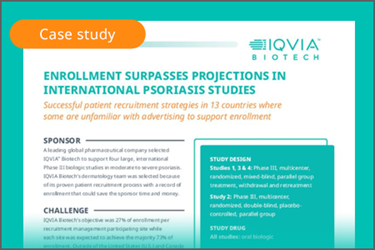 A leading global pharmaceutical company selected IQVIA™ Biotech to support four large, international Phase III biologic studies in moderate to severe psoriasis. IQVIA Biotech’s dermatology team was selected because of its proven patient recruitment process with a record of enrollment that could save the sponsor time and money.