A Firsthand Experience In Africa — Better Than Expected

Clinical studies have been conducted in the Western countries for decades, were expanded significantly to Central and Eastern Europe in the late 1990s and moved into the Middle East and North Africa (MENA) as well as Asia-Pacific (APAC) less than a decade later. However, except for South Africa, the sub-Saharan countries are still largely underrepresented in the global clinical study map. Hesitation to conduct clinical studies in Africa may be partly a result of assumed poor infrastructure, missing regulations, and inexperienced researchers.

Is it truly so? Or is our thinking stuck somewhere in the past?

This year, I had the opportunity to audit 12 research centers in six countries, including Mali, Burkina Faso, Gabon, Kenya, Tanzania, and Mozambique. While there, I conducted a series of system audits evaluating adherence to Good Clinical Practices (GCP), Good Clinical Laboratory Practices (GCLP), Good Laboratory Practices (GLP), quality management systems, and documentation management systems to ensure the research centers’ readiness to conduct a large malaria study. I also performed a series of audits of an ongoing Phase 3 malaria study.

I was already well familiar with conducting studies in Egypt and South Africa; however, I was careful not to assume it would be the same between the North and the South. I did not know what to expect in terms of structure, staffing, labs, internet, security, and research experience. Regardless, I remained compelled by my 20-year dream to work with African countries. About 15 years ago, I applied to the WHO, the U.N., and various non-governmental organizations. All doors were closed since I had no sponsor to pay these organizations and my salary. Years passed and I settled with the thought that the dream would remain a dream. When the opportunity came to perform these audits, I could hardly believe the old dream was becoming reality. You do not live your dreams very often. I got excited and curious to see how these research centers work.

In Africa, a research center is not a hospital with a research office. Rather, these centers are organizations with their own administration, accounting, logistics, transportation, clinical and analytical laboratories, research department, data centers and data management, quality assurance, IT, archives, security, and clinical sites, whether on campus or at a local hospital, typically within a walking distance. They may also have satellite sites at dispensaries to get closer to local communities, where it would be challenging for residents to travel to the research center due to their financial situation, the distance, nonexistent paved roads, and limited means of transportation.

The study teams are very large, with 40 to 70 team members not an exception, something I have never seen in the West. As you can imagine, the principal investigators are excellent organizers and, believe it or not, they practice close oversight of delegated duties. They frequently visit all the associated sites, run regular and ad-hoc meetings with their teams, and are involved in all important decisions. One professor in rural Burkina Faso particularly impressed me; he could easily run a midsize company, judging by his organizational skills and logical approach.

All of the research centers I visited have a history of at least 20 years. They have been running registries as well as conducting basic research, clinical research, and epidemiological and therapeutic studies. Naturally, they focus a lot on malaria and neglected tropical diseases that still present a huge healthcare burden. Most of the sub-Saharan research centers were established in efforts to decrease the burden. Local researchers have been studying malaria types, transmission, risk factors, and possible prevention and mapping prevalence, incidence, seasonal patterns, and mortality. The have been significantly contributing to malaria vaccine studies, including the first and only available malaria vaccine to date, Mosquirix, developed by GSK, which was prequalified by the WHO on Sept. 6, 2022.[1] The development took 20 years, which shows the perseverance and zeal of the researchers, their resourcefulness since they are not funded by local governments, and their experience in handling challenges.

Apart from local research, the investigators participate in international research projects and studies, publish, and teach. They work very hard; otherwise, their chances to get involved in large sponsored studies are low. 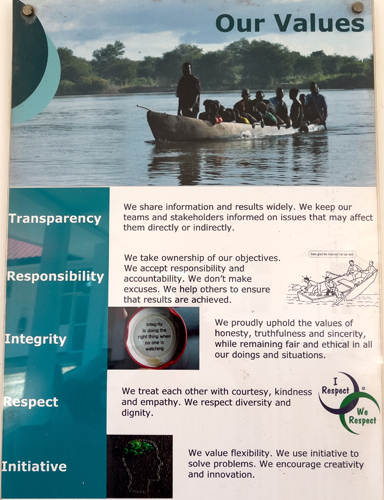 In my first trip, I visited a research center in Tanzania. Waiting for my escort, I read a poster with the organization’s core values. One of them read, “Doing the right thing when nobody is watching.” They called it integrity. Observing the employees and talking to them, I saw they lived a quality culture without talking about it. This was the first time in my life I read standard operating procedures (SOPs) related to activities involving study participants where the procedure’s steps started with the investigator introducing him/herself, followed by an explanation of the procedure to the participant (Note: Not to the “subject” but to the “participant”), and ended with “thank you” to the participant for cooperation.

On a wider scale, patient engagement and patient centricity seem to be long-standing practices. In the West, we started talking about patient engagement and patient centricity just a few years ago. In sub-Saharan Africa, I saw the strong feeling of responsibility toward local communities and improving healthcare in their country in every research center. They have been practicing it for decades; it is part of their vision and mission. It is one of the reasons for their existence. Yes, it stems from the socioeconomic situation of the countries (limited access to healthcare, low number of physicians per capita, scarce national health improvement programs, low healthcare budgets, etc.). However, since it has been part of the research for a long time, it runs in the blood, and I think it will stay after the standard of living improves. The regulators strongly support and encourage it, asking the centers to include the capacity building plan in study submission packages.

One of the objectives of every study is improving local communities’ awareness about the disease and possible measures people can apply to protect themselves and their families. The doctors approach the community elders and, with their support, educate the communities. The centers work closely with local hospitals in training their personnel and offering the capacity of their labs. This is a clear win-win-win for the research center (access to participants), hospitals (access to tests they otherwise cannot do), and local people (access to better healthcare). Everybody benefits.

Laboratories are the core of each research center and appear as well-equipped as any U.S. or other Western lab. The instruments and equipment are mostly new and each key instrument and equipment is doubled to serve as a backup. Many labs are also accredited or are preparing to be accredited for ISO 15189.

When it comes to financing, funds come from research grants, donations of philanthropists and foundations, such as the Bill and Melinda Gates Foundation. In at least one case, one Tanzanian principal investigator/research director won a European research prize that made him a multi-billionaire in the local currency. In return, he put all the money into upgrading the lab and building a research training center for young scientists from his own as well as neighboring countries.

Commenting on the current clinical trials landscape in Africa is a complex endeavor. To best serve the country and its efforts, a follow-up article is forthcoming. In it, expect to learn more about Africa’s safety and security, regulatory landscape, socio-economic challenges, and its potential to contribute to global clinical research.

Kamila Novak, MSc, got her degree in molecular genetics. Since 1995, she has been involved in clinical research in various positions in pharma and CROs. Since 2010, she has been working as an independent consultant focusing on QA &QC being a certified auditor for several ISO standards, risk management, medical writing, and training. She is a member of the Society of Quality Assurance (SQA), the World Medical Device Organization (WMDO), the European Medical Writers’ Association (EMWA), the Drug Information Association (DIA), the Continuing Professional Development (CPD) UK, and other professional societies.