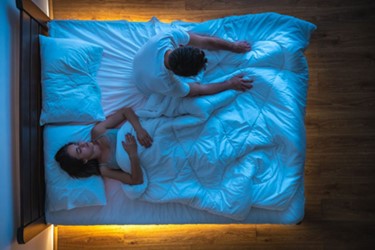 Posttraumatic stress disorder (PTSD) is estimated to affect approximately 10% of women and 5% of men in the United States at some point in their lives1. Clinically significant levels of sleep disturbances, a core feature of PTSD2,3, was noted in nearly 70% of individuals with PTSD4,5. PTSD has been associated with: a) reduced sleep efficiency, b) increased sleep latency, c) increased sleep fragmentation, and d) greater night-to-night variability in sleep2,6-10.

The relationship between PTSD and sleep disruption is complex. Sleep patterns of those with PTSD likely fluctuate over time depending on the chronicity of PTSD, nature of trauma, comorbid conditions, and medication usage. Actigraphy is thus ideally suited to studying these patterns as it is precise, non-invasive, objective, and provides continuous data over periods of weeks or months. Subjective reports of sleep complaints are common in PTSD, however, results of objective measures from polysomnographic (PSG) and actigraphy studies are inconsistent. Some studies examining objective measures of sleep in PTSD have not found substantial sleep abnormalities6,11, whereas others have detected a variety of differences in various sleep parameters between individuals with and without PTSD (e.g. 12-14). Additionally, data from several PSG and actigraphy-based studies suggest that individuals with PTSD often report sleep disturbances in the absence of any demonstrable disruption in objectively measured sleep, highlighting the divergence of self-reported and objective measurements of sleep15. Moreover, shorter study durations (1-2 nights), lack of replication, methodological inconsistencies in assessment techniques (PSG vs actigraphy; daily sleep diary vs retrospective questionnaire) and settings (home vs. laboratory) have prevented data comparisons across studies15.