Data-Driven Insights To Improve Your Recruitment Process For Clinical Trials

By Michael Gebauer and Andreas Krämer 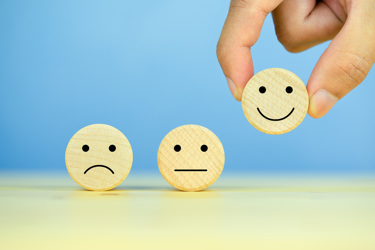 Globally, approximately $186 billion was spent on drug discovery in 2019,1 with nearly 50 percent of that spent on clinical trials.2 One of the major challenges in this regard is the recruitment of suitable patients,3,4 who are sometimes driven by negative attitudes or a lack of education and information about clinical trials in general.5 However, robust data based on representative research are rare. For example, Trauth et al. (2000) report a willingness to participate of 46 percent (n=489 in the U.S. state of Pennsylvania).6 A CISCRP study reported a basic willingness to participate of more than 80 percent,7 but the study does not appear to be representative of the population as a whole. Unfortunately, the probability that a patient will refuse to participate in a clinical trial even after being well informed is considerable.

Especially for research sites, it could therefore be extremely helpful to have more in-depth information on patients' attitudes toward clinical research in order to be able to target potential trial patients accordingly. Therefore, the following questions arise:

To obtain a reliable data basis on the attitudes and motivations of (potential) patients, we surveyed a total of 2,599 people (n=2,350 during the first wave in April/May 2020) from Germany, Austria, Switzerland, and Sweden (online, 18-80 years) on various areas of life in the second wave in November/December 2020. This study, called OpinionTRAIN, was conducted as a cooperative project by exeo Strategic Consulting AG and Rogator AG. The representative study examined various areas of daily life during the coronavirus crisis, including aspects such as mobility, shopping, media consumption and health.8 The questions about healthcare and, specifically clinical research, were developed together with Siteworks GmbH based on preliminary studies in focus groups with study participants. Overall, the willingness to participate in trials in Germany is 48 percent on average (Figure 1). In Sweden, this willingness is significantly higher (62 percent), whereas lower willingness is found in Austria (35 percent). Findings from the first wave are presented in parentheses and show only minor differences in terms of country-specific results and comparisons across countries. 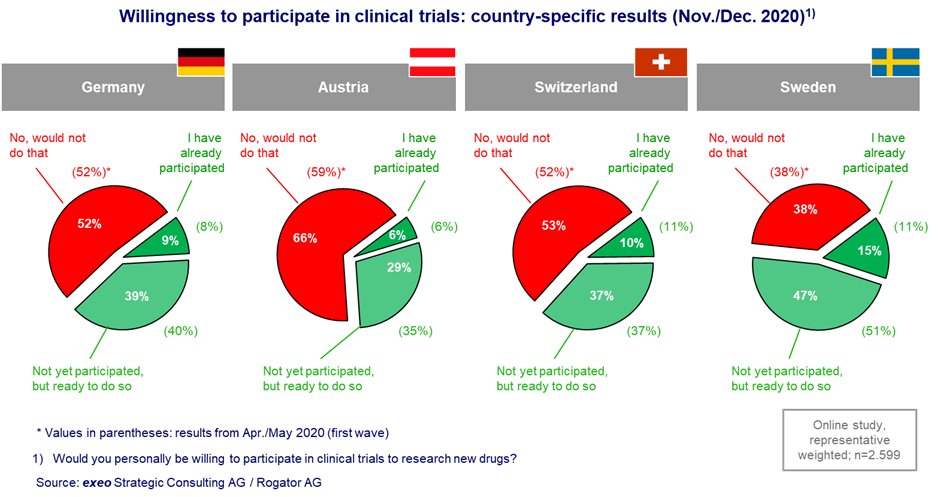 First, various sociodemographic factors were examined for their influence on willingness to participate. It seems conceivable that factors such as age, place of residence, or level of education or income could be relevant. However, these factors were found to have only a minor influence, if any, on the willingness to participate in clinical trials.

In addition, 57 percent of people owning an organ donor card are willing to participate in a trial, whereas people without an organ donor card only achieve 45 percent agreement. This can be interpreted as evidence that people may certainly be motivated to participate in a clinical trial by altruistic motives such as "I am doing something good for the general public with my actions." On the other hand, the results showed that 72 percent of vaccination opponents are opposed to clinical trials, whereas only 50 percent of vaccination supporters would rather not participate in a trial. As earlier results from a meta-analysis suggested, attitudes of potential trial participants may be important drivers for or against participation.9 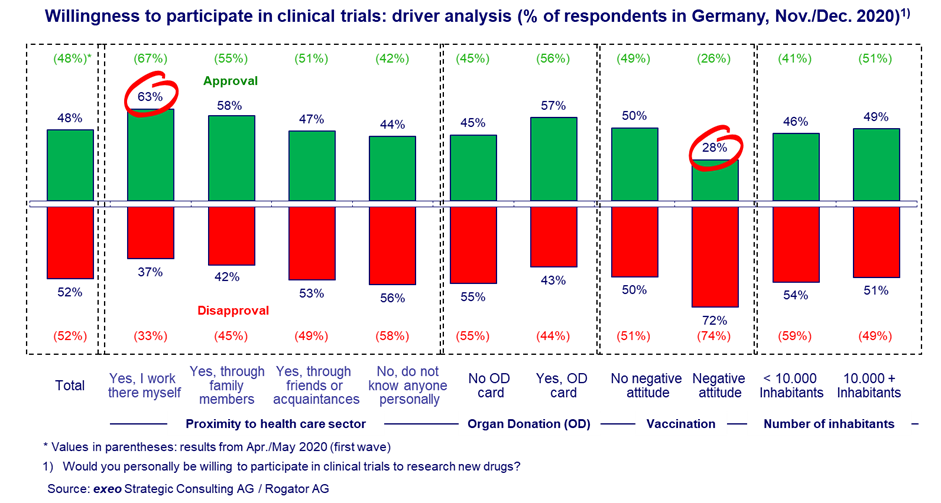 As can be seen, relatively clearly identifiable characteristics emerge that indicate a tendency toward a positive or negative attitude to clinical trials and, above all, to willingness to participate in trials themselves. The positive message for study centers is that, with just a few questions in the run-up to educational interviews, it might be possible to take a far more targeted approach to identify those patients who, on the basis of these characteristics, show a high probability of participating in a clinical study. On the admission form in inpatient and outpatient settings, it would be easy to include, for example, questions about persons of trust in the healthcare system, possession of an organ donor card, or the general rejection of vaccinations. According to the OpinionTRAIN results, people who are close to the healthcare system (work in the healthcare system) and do not have a negative attitude toward vaccination show a willingness to participate of 66 percent (Index 135), while people without a connection to the healthcare system who have a negative attitude toward vaccination only show a rate of 21 percent (Index 43) (all four countries). There is a spread of 45 percentage points between the lowest and the highest rates, or a factor of about three. Again, both studies – regarded as two independent samples – show stable patterns and drivers, which indicates a high degree of reliability and robustness.

Consequently, information on two parameters alone could identify and prequalify potential participants for clinical trials relatively accurately even before the first contact meeting. Knowing this, it may be possible to prevent some of the discussions that are doomed to failure and, thus, to realize significant savings, especially with regard to the scarce resource of "physician time" in research. Instead of a broad approach, the focus can be directed toward patients who are open-minded on the topic. Hence, there is a chance that a core problem of clinical research, the recruitment of patients, can be processed more efficiently.

Prof. Dr. Michael Gebauer is CEO of Siteworks GmbH, a site management organization conducting studies in outpatient and inpatient settings. Until 2020 he held a professorship in corporate management, and since 2007 he has been working in a management or consulting capacity for various companies in clinical research. Contact: gebauer@siteworks-research.de.

Prof. Dr. Andreas Krämer studied agricultural economics at the University of Bonn, where he later earned his doctorate. He then worked for two consulting companies. Since 2000, he has been CEO of exeo Strategic Consulting AG. Contact: andreas.kraemer@exeo-consulting.com