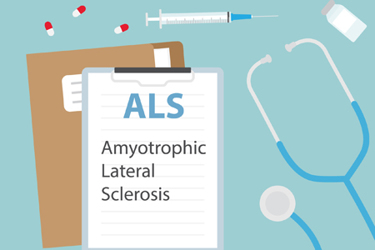 There are approximately 17,000 people in the United States living with the progressive neuromuscular disease amyotrophic lateral sclerosis (ALS). The exact cause for ALS is still unknown; about 10%-15% of cases have known genetic causes (familial ALS), while the remaining cases have no clear cause (sporadic ALS).

In people with the disease, motor neurons (muscle-controlling nerve cells) are destroyed, causing muscles to become nonfunctional. It has been proposed that dysfunction of structures within motor neurons, specifically the mitochondria (cell “powerhouse”) and the endoplasmic reticulum (structure where proteins are made and transported), may contribute to cell stress, damage, and death. The loss of motor neurons in people with ALS results in muscle weakness, disability, and eventually loss of life, often within 3 to 5 years following diagnosis.

Right now, there is no cure for ALS and approved therapies only moderately slow progression of the disease. There are currently two treatments approved for ALS by the FDA. The glutamate blocker riluzole (Rilutek) was approved in 1995 and has been shown to moderately increase life expectancy by three to six months. Intravenous (IV) administration of the antioxidant drug edaravone (Radicava) was approved in 2017. Participants receiving edaravone in clinical trials experienced significantly reduced decline in ALSFRS-R score, meaning that edaravone treatment slowed progression of disease. The efficacy of oral (by mouth) edaravone (Mitsubishi Tanabe Pharma Development America, Inc.) was evaluated in a Phase 3 clinical trial, and this formulation received FDA approval on May 12, 2022. Approval of this formulation will allow the drug to be taken easily at home, orally or via feeding tube, rather than requiring an IV.

Research advances and the promise of targeted therapeutics on the horizon offer hope for people living with the disease.

Platform trials are offering unprecedented flexibility in studying new therapies and interventions. This clinical trial design allows multiple interventions to be evaluated simultaneously or sequentially against a common control group and also allows addition of new interventions to be studied throughout the trial. The use of platform trials is intended to reduce the cost of research, decrease trial times, and increase participation of patients in clinical trials.

The HEALEY ALS Platform Trial is the first platform trial to evaluate safety and efficacy of investigational products for treatment of ALS. It is a large, multi-center study, headed by researchers at Massachusetts General Hospital and funded by multiple partners, including MDA. The therapies under evaluation in HEALEY ALS, zilucoplan, verdiperstat, CNM-Au8, priodopidine, and trehalose, are being compared to placebo controls in a regimen and with study conditions dictated by a master protocol (this is known as a perpetual platform trial). New drug candidates will be continuously added for evaluation as they become available, and additional participants may enroll in the study as needed. The expectation is that HEALEY ALS will speed the time-to-market of promising ALS therapies, while lowering costs associated with drug development.

One promising investigational therapy under evaluation in the HEALEY ALS Platform Trial is CNM-Au8 (produced by Clene Nanomedicine). Mitochondrial dysfunction and oxidative stress (toxicity due to harmful free radicals) have been associated with several neurodegenerative diseases, including ALS. CNM-Au8 is a stable suspension of pure gold nanocrystals designed to increase mitochondrial energy production and protect cells against oxidative stress. CNM-Au8 can cross the blood-brain barrier, the membrane that prevents potentially harmful microbes and chemicals from reaching the central nervous system (CNS). The blood-brain barrier is a common obstacle for treatments targeting the CNS. Treatment with CNM-Au8 is expected to prevent nerve cell death and slow disease progression in people with ALS. Within the HEALEY ALS trial, the CNM-Au8 Phase 2/3 trial arm is testing the therapy in up to 160 adults with sporadic or familial ALS. The safety, pharmacokinetics, pharmacodynamics, and effectiveness of CNM-Au8 have also been evaluated in the Australian-based Phase 2 RESCUE-ALS trial, with top-line results expected in the upcoming months. Clene also plans to initiate RESTORE-ALS, an international Phase 3 trial of CNM-Au8 that will include approximately 300 patients with early-onset ALS, later this year. For people with ALS who are not eligible to participate in ongoing clinical trials but may benefit from the experimental therapy, Clene Nanomedicine has launched an expanded access program (EAP) in the U.S.

There has been a lot of excitement around another investigational therapy, Amylyx’s AMX0035, which is a combination of two orally available small molecules, sodium phenylbutyrate and taurursodiol. AMX0035 is designed to promote the function of the mitochondria and endoplasmic reticulum, potentially reducing the damage and death of motor neurons that cause ALS. In the Phase 2 CENTAUR trial, people receiving AMX0035 demonstrated slower functional decline on a scale of daily function (ALSFRS-R scale) than those taking placebo and most people on the drug saw improvement in fine motor function. In a three-year follow-up period, the treated participants also showed improvements in secondary endpoints, with reduced risk of death, and reductions in a combined assessment of death, tracheostomy, permanent assisted ventilation, or first hospitalization. The benefits of AMX0035 are now being assessed in the larger Phase 3 PHOENIX trial, which is expected to include up to 600 adults with ALS whose symptoms started in the past two years, a less-stringent criteria than was required for CENTAUR. The FDA is expected to make its decision about approval of AMX0035 by June 29.

Several groups are taking new approaches to targeted therapy, with first-in-class investigational therapies. Transposon Therapeutics, Inc. is exploring the use of a nucleoside reverse transcriptase inhibitor, TPN-101, in people with ALS and/or frontotemporal dementia (FTD) associated with hexanucleotide repeat expansion in the C9orf72 gene (C9ORF72 ALS/FTD). TPN-101 inhibits a viral enzyme, known as reverse transcriptase, and was first in development as a potential antiviral therapy for HIV-1. In the context of ALS, TPN-101 is thought to inhibit a cellular reverse transcriptase enzyme called LINE-1, which has been implicated in C9ORF72 ALS/FTD. The safety and tolerability of TPN-101 in people with C9ORF72 ALS/ FTD is under investigation in a Phase 2a trial, with pharmacokinetics, pharmacodynamics, and clinical effect as secondary outcomes under evaluation.

An innovative approach on the horizon for disease management in ALS is the use of brain–computer interfaces (BCIs). When realized, these devices will allow a person to control a computer or other electronic device using only brainwaves. BCIs are being examined as rehabilitation devices to help people compensate for the loss of motor skills due to conditions such as ALS. BCI systems can be invasive, requiring surgery to implant electrodes on the surface of the brain, or noninvasive, using electrodes placed on the scalp, usually in the form of a cap. The electrodes are connected to a computer, which uses software to translate brain signals into computer commands.

Several companies are racing to turn BCIs into a reality. The BrainGate2 Neural Interface System is in a pilot phase clinical trial, which is currently enrolling in several locations across the U.S., to obtain preliminary safety information on the device and to demonstrate feasibility of its use in people with tetraplegia. The study will test the ability of participants to control a computer cursor and other assistive devices with thoughts. It will also examine the participants’ ability to operate communication software, such as email, by imagining the movement of their own hand. Implementation of this device is invasive, but it provides hope for individuals with limited or no ability to use their hands due to various conditions, including ALS.

The company Synchron has also received clearance from the FDA to run a clinical trial of their implantable BCI, known as Stentrode, in human participants. The company’s early feasibility study will assess the device's safety and efficacy in six people with severe paralysis and will begin later this year at Mount Sinai Hospital in New York.

MDA is committed to funding research and education that improves the lives of people with neuromuscular disease. In the area of new ALS therapeutics, MDA funding has contributed to the research of Sabrina Paganoni, assistant professor at Harvard Medical School and co-PI for the HEALEY ALS Platform Trial, and to Dr. Stan Appel at Houston Methodist Neurological Institute and Dr. James Berry at Massachusetts General Hospital, who are testing a novel way to reprogram the T cells of those with ALS. Moreover, MDA’s multi-disease patient registry, MOVR, has collected clinic-entered data from more than 2,000 patients with ALS. This data is being used to understand the natural history of ALS and has enormous comparative value for platform and other clinical trials. MDA’s multi-pronged efforts support the work being done by researchers and clinicians in the understanding of and development of new interventions for ALS.

Sharon Hesterlee, Ph.D., is the Chief Research Officer at the Muscular Dystrophy Association (MDA). Prior to rejoining MDA, Hesterlee served as the executive vice president for portfolio development and head of neuromuscular programs at Asklepios Biopharmaceuticals, Inc. (Askbio). Before joining Askbio, she served as a director of gene therapy and project lead at Pfizer Inc.’s Rare Disease Research Unit. In the 15 years before transitioning to industry-focused roles, Hesterlee served as Chief Science Officer for the Myotonic Dystrophy Foundation, vice president of research for Parent Project Muscular Dystrophy, and scientific director of the Association for Frontotemporal Degeneration. During her initial work with MDA, she served as senior vice president and executive director of MDA Venture Philanthropy and vice president for translational research.