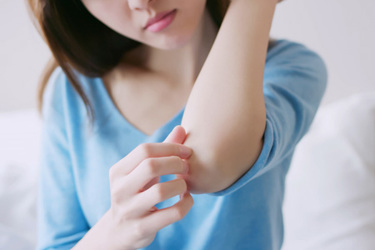 The compulsion to scratch negatively affects the quality of life of millions of people with a wide range of conditions. The problem is drug developers lack an objective way to show their treatments reduce scratch, leaving them reliant on patient reported outcomes (PROs) to determine efficacy. Now, leading companies are using wearable sensors to create a validated digital endpoint to measure scratch in clinical trial participants.

Scratch and itch are interdependent symptoms. Itch provokes the desire to scratch. Scratching leads to further problems such as inflammation and lesions that, in turn, cause itch.1 Many people are caught in that vicious itch-scratch cycle.

Itch is most commonly associated with dermatological conditions — it is reported by 79% of psoriasis patients in the US and 54% of all skin disease patients in Europe — but it affects people with a wide range of health problems.2,3 One study found 40% of adults in an outpatient general internal medicine clinic suffered from itch, and it is known to negatively affect the quality of life of patients with conditions including chronic venous disease, some cancers, and liver diseases.4–7 Thanks to the non-invasiveness and ease of implementation, an objective scratch measure using wrist-worn wearables is now a realistic proposition pursued by leading drug developers. Objective Scratch Assessments Using Digital Health Technologies (DHTs) 3

Traditionally, drug developers have indirectly assessed scratch using physician assessments of lesions and patients’ own subjective views. Both approaches have flaws, with physician assessments only providing a periodic snapshot and PROs being a subjective measure that is prone to compliance problems.8 The result? Drug developers have an incomplete picture of the effects of their medicines, and physicians lack a validated, objective way of gauging the severity of the suffering faced by their patients.