The Evolution Of Compassion: Janssen's Innovative Collaboration On Behalf Of Seriously Ill Patients 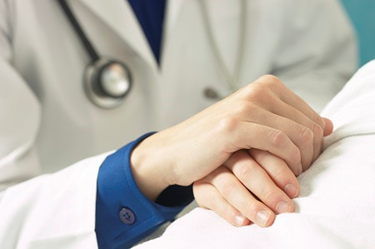 In 2014, an important dialogue was initiated between big pharma and big academia. The Janssen Pharmaceuticals Companies of J&J, Office of the Chief Medical Officer and the Division of Medical Ethics at NYU School of Medicine partnered to implement an innovative model to support their most important stakeholder — patients. This was for seriously ill patients who had exhausted all available options, were not eligible for a clinical trial, and sought access to treatment that was still in development via a pathway often referred to as “compassionate use” (CU). Concurrent to this discussion, patients who felt their requests to companies were not being heard were taking to social and traditional media outlets to share their stories. Patients who were either denied or did not receive a response were growing increasingly frustrated with navigating a process that seemed, at best, obtuse and, at worst, one that squandered precious time.

As part of overarching policy enhancements to reviewing CU requests, Janssen sought neutral third-party decision support from NYU for these critical requests. While pharma and the FDA had been providing CU access since 1979, this collaboration between Janssen and NYU was innovative due to the engagement of non-biased third parties whose task was to review requests and provide input from a bioethical lens in a blinded manner.

Several months later, the collaboration was formalized and announced on CNBC and in The New York Times, among others. On the day Meg Tirrell of CNBC interviewed representatives from Janssen and NYU about this innovative model, I awaited a hiring decision that would bring me to Janssen to help start the group responsible for this collaboration. I had completed my interview series and understood the focus would be CU, but of course I was not aware this program was brewing. As I watched Tirrell’s piece, I had two thoughts. First, this collaboration was a game changer for patients. And, if this was announced and I wasn’t hired yet, I probably didn’t get the job. I was wrong about one thing. I joined the Office of the Chief Medical Officer shortly thereafter.

Four years later I have the privilege of continuing our collaboration with NYU to facilitate and expand what is now known as the Compassionate Use Advisory Committee (CompAC), a responsibility that is at once awe-inspiring, edifying, and exhilarating. Often, we are asked what makes CompAC successful, and attributes similar to any partnership apply. Once the legal and logistical aspects are established, the formula emerges, a formula that is as much about emotional intelligence as intellectual intelligence. Both parties must be comfortable with ambiguity and a desire to create new paths — and it should go without saying that mutual respect is essential not only for the establishment of the working relationship, but also for it to be sustainable.

With all that said, let me tell you how CompAC works and what precisely it does to support Janssen’s decision making. It’s important to note that CompAC membership is uniquely composed of bioethicists, physicians, and patient representatives chosen at NYU’s sole discretion and management. For absolute clarity, CompAC is not the decision maker on Janssen requests; they provide recommendations to Janssen to support the decision framework in two key ways. First, they review the overarching strategy for any agent where CU is planned. They are presented with information such as risk-benefit profiles, planned patient population, and eligibility criteria, to name a few.

This review aids us significantly with “we don’t know what we don’t know” — inherent bias may prevent us from seeing what is naturally clear to this group and highlight critical ways to mitigate vulnerability for patients. It also reinforces a key Janssen principle for providing compassionate use access: consistency. This strategy review by CompAC ultimately contributes to the second key contribution — supporting the development of criteria by which they will review and consider single patient requests received by Janssen. Agreement is reached on not only what kinds of cases will go to CompAC for review, but also the criteria and timeframe for review required, and the bioethical considerations, all customized per agent. The review process looks like this: 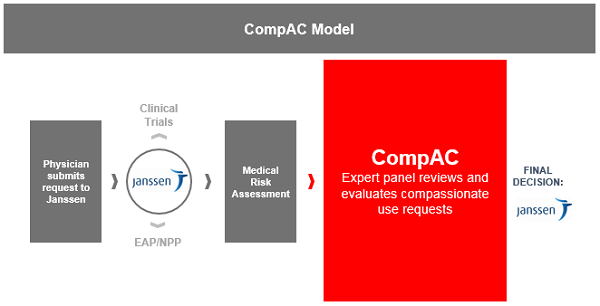 I’m pleased to say that a key goal established at the outset is coming to fruition. The model is being replicated across the industry, which ensures single patient requests beyond the walls of Janssen will have the opportunity for bioethical and consistent review. In 2017, the nonprofit ge2pe2 global foundation was formed to provide bioethical advice on various areas to pharma and biotech, CU being one directly adapted from the work done by NYU and Janssen. This model may alleviate some infrastructure limitations, particularly for small biotech companies, while still allowing for a robust decision-making process.

It’s important for people to understand, however, that fiscal and human capital are not the be-all and end-all to this. Companies can throw money at projects, but it doesn’t make them successful or sustainable. Without organizational commitment from the highest levels, things flame out quickly.

It is certainly no coincidence that part of NYU’s mission is “to serve, to teach, to discover.” Our CompAC collaboration is a testament to a shared desire to bring these critical missions to life. Together we work to serve, to teach, and to continue to discover innovative ways to serve patients in need.

Christine MacCracken, MSHEd, BSN, is director, patient support in the Global Medical Organization, Office of the Chief Medical Officer, at Janssen Pharmaceuticals. In this role, she is responsible for developing and implementing patient-centered programs to support and elevate critical needs of people around the world. She is a passionate advocate for patients and operates by the tenet that “every patient is a person first” to ensure fair and equitable frameworks for access to investigational medicines. In her current role, MacCracken is responsible for CompAC, Janssen’s innovative collaboration with NYU School of Medicine to ensure ethical, solutions-based decision frameworks for investigational medicine requests.