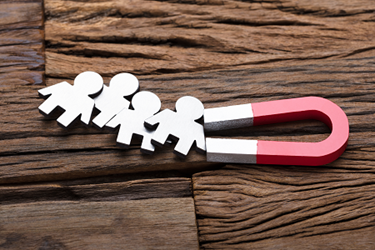 The current approach to clinical trial recruitment is prolonged, costly, and inefficient and often causes major delays and challenges for research across multiple disease states. The vast majority (85 to 90 percent) of studies in the U.S. experience significant delays in recruitment and enrollment.1 Nearly one-third of trials under-enroll, and only 7 percent meet their target enrollment number on deadline.2

For Alzheimer’s disease in particular, recruitment is a daunting challenge. This is especially true for prevention research, which aims to target the disease before symptoms manifest. These types of studies often require specific enrichment strategies, such as biomarker evidence of Alzheimer’s or genetic risk for the disease, which can lead to higher screen-fail rates. For many prevention trials, researchers must screen tens of thousands of cognitively healthy older adults in an effort to identify a few thousand eligible to enroll.

These challenges are not unique to Alzheimer’s, and every research opportunity presents its own set of hurdles to overcome. Researchers across disease areas can learn from one another about how to meet recruitment targets that are critical to moving important research forward.

One method that’s been developed to help overcome these challenges is recruitment registries, or large databases used to identify and match people to available studies. In a paper I recently published in Alzheimer’s & Dementia: The Journal of the Alzheimer’s Association, I discussed my experience creating GeneMatch, the first trial-independent research enrollment program designed to recruit and refer cognitively healthy adults to Alzheimer’s prevention studies based in part on the individual’s apolipoprotein E (APOE) genotype, a genetic risk factor for the disease.

A predominately online registry created by the Alzheimer’s Prevention Initiative, GeneMatch has recruited more than 75,000 participants to date, including 30 percent who have one APOE4 allele, and 3 percent with two APOE4 alleles. The e4 type of the APOE gene is strongly linked to late-onset Alzheimer’s. Roughly one in four people carry a single copy of the e4 type of the APOE gene, and about 2 percent of the world’s population carries two copies.3 Participants must be between the ages of 55 and 75, live in the U.S., and self-report no diagnosis of cognitive impairment.

The trial-independent approach enables genetic information to be stored outside of a specific trial and allows participants to be recontacted for a variety of studies for which they might be eligible, rather than just one trial.

Since GeneMatch launched in 2015, there have been several key takeaways that may be useful to the research field in general for overcoming recruitment challenges. Here are four important ones:

1. Ensure participants are well-informed before they consent to provide genetic information.

Informed consent is an important regulatory step in all research studies. This requires informing participants of all the necessary information, ensuring they understand the process, and giving them a sufficient opportunity to consider whether to participate. This is especially important for GeneMatch because participants consent to share very personal information and do so online without a healthcare provider present to answer any questions. When GeneMatch originally launched in 2015, potential participants were required to create an account enrolling in the program prior to completing the education module, which provides information about Alzheimer’s disease, the APOE gene, and the GeneMatch program. Following the education module, individuals were then prompted to answer five questions to reinforce the key learning concepts. Based on feedback during the testing phase, we reorganized the enrollment process to make sure potential participants were fully briefed on the program before creating an account. This modification resulted in an improvement in enrollment and drop-off rates.

A major barrier to enrollment in recruitment registries lies in potential participants’ concerns around privacy of sensitive genetic information. To address this, GeneMatch received a Certificate of Confidentiality from the NIH and updated the program website to more prominently feature Banner Alzheimer’s Institute, the academic, nonprofit organization leading the program, as well as the program funders. Additionally, the program added a “Frequently Asked Questions” section to the website including information about the Genetic Information Nondiscrimination Act. This information reinforces the registry’s commitment to participant confidentiality.

While the online format is a great platform for enrolling thousands in recruitment registries, it is still important to consider an “on-the-ground” approach to enrollment. Many people become interested in participating in research while attending community events or talking with their healthcare providers. In the first iteration of GeneMatch, some researchers and physicians were frustrated that they couldn’t immediately enroll interested individuals without requiring them to wait one to two weeks to receive their cheek swab kits in the mail. Based on this feedback, GeneMatch decided to launch a healthcare partner site program, in which investigators at other institutions become subinvestigators on the GeneMatch study, allowing for quick enrollment and the ability to distribute cheek swab kits on-site. In order to measure the impact of local partner programs and other enrollment sources, we are tracking study acceptance to see if one method proves better than the others.

Facebook has become an important channel to reach U.S. adults, especially for marketers targeting older adults. It is the number one social platform used by seniors (65+), and 65 percent of U.S. adults between the ages of 50 and 64 are active on Facebook, according to a recent Hootsuite report.4 Additionally, according to a report by Social Media Examiner, 93 percent of marketers use Facebook advertising regularly.5 Due to the popularity of this platform among our target audience and the potential advertising opportunities, GeneMatch employed a Facebook advertising campaign to recruit participants. Currently, over half of our participants (60 percent) joined GeneMatch via Facebook advertisements. This method has also been used to successfully address the underrepresentation of men in the program: We have raised the percentage of men from 21 percent to 44, a statistically significant increase. Now we are working on finding ways to address the underrepresentation of ethnic and racial minorities in the program, which is very important for its success. Additionally, we hope to better understand how recruitment strategies differ in terms of study acceptance and the cost-effectiveness of the various enrollment methods.

Although GeneMatch is still early in its development, we have demonstrated it is feasible to enroll tens of thousands of people online and have them complete a cheek swab kit at home for APOE genotyping. We are optimistic that GeneMatch will be an effective resource for efficiently referring potential participants to Alzheimer’s prevention studies and reducing screen fail rates. Future publications in peer-reviewed journals will report on the effectiveness of GeneMatch for accelerating recruitment and enrollment into Alzheimer’s prevention trials. Our hope is that one day soon, GeneMatch can serve as a model for other research hoping to improve recruitment benchmarks.

Jessica Langbaum, Ph.D., is director of the Alzheimer’s Prevention Registry and its GeneMatch program. In addition, she is responsible for the scientific oversight of the Alzheimer’s Prevention Initiative clinical trials program, which currently includes the API Autosomal Dominant Alzheimer’s disease trial in Colombia and the API Generation Program. Langbaum serves on several national and international advisory boards. She received her bachelor’s degree in neuroscience and psychology with high honors from Oberlin College and her doctorate in psychiatric epidemiology from the Johns Hopkins University Bloomberg School of Public Health.