An Introduction To Contingency Tables For Clinical Study Analysis 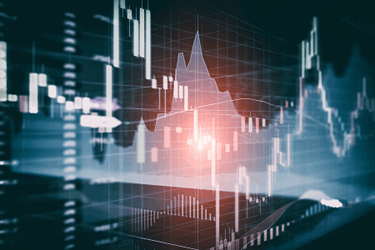 Contingency tables can be used to summarize probability distributions, namely (a) joint, (b) marginal, and (c) conditional distributions. As you can see from the definitions below, the sum of probabilities in each type of distribution must add up to one, which in statistician thinking is 100 percent.

Contingency tables can be used to derive much more than distributional probabilities, and this is why they are so useful in clinical research and diagnostic testing to compare observed effects with effects predicted from a statistical model, such as a logistic regression, or to investigate adverse events between treatment arms.

In this article I will show a simple 2x2 contingency table and how you can derive many useful statistics from the information presented. Figure 1 is a template of how to set up the classification table; each of the fours cells is given a letter for reference (a, b, c, or d).

Figure 2 is a contingency table with data comparing the subjects in two study arms of (a) treatment or (b) control, with the occurrence of an adverse event (AE; AE = yes vs. AE = no). Each of the 1,000 study subjects was classified into only one of the four available cells in the classification table.

Figure 1: Contingency (cross-tabulation) table with cell descriptors (a, b, c, d) for ease of reference 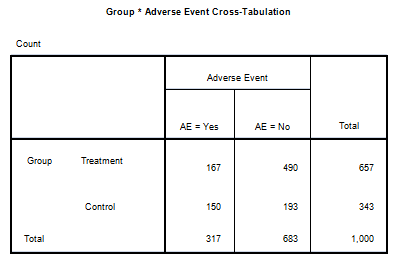 The probability distributions can be found as:

Joint Distributions of the Four Cells:

The four percentages add up to 100 percent (probability of one). So that is good!

The percentages of the two rows add up to 100 percent. We're happy!

The percentages of the two columns add up to 100 percent. We're still happy!

Each of the four pairs adds up to 100 percent, so we are totally happy!

But wait, there's more! The cells of the 2x2 contingency table can be used to derive many other useful statistics and measurements. I won't go into detail on each one. Figure 3 is a presentation of measurements and associated formulas that can be used to derive numbers from contingency tables. In the formulas, N is the total number of subjects. (We used 1,000 subjects in our example.)

Some of the measurements are better used in diagnostic or genetic testing. I adjusted the contingency table cell names to show the proper setup for predicted vs. observed values.

However, some of the formulas are useful in our example of adverse events. For instance:

As we've seen, statistics do not have to be complicated to be useful. Contingency tables are a great example of setting up your numbers in a particular way so that you can obtain important information with just simple math. I didn't cover statistical tests for contingency tables. However, if you would like to learn more about contingency tables and the statistical tests that can be used with the tables (such as chi-square and Fisher's Exact Test), check out my webinar Chi-Square and Friends: Fun with Contingency Tables. It is an overview, but I include some more details and a few references.

I would also like to know what statistical concepts or applications you want to know more about, so I can write future columns that are interesting and informative. So let me know your ideas by posting a comment below or by emailing me at elaine@OmegaStatistics.com.

Elaine Eisenbeisz is a private practice statistician and owner of Omega Statistics, a statistical consulting firm based in southern California.

Eisenbeisz earned her B.S. in statistics at UC Riverside, received her master's certification in applied statistics from Texas A&M, and is currently finishing her graduate studies at Rochester Institute of Technology. She is a member in good standing with the American Statistical Association and a member of the Mensa High IQ Society. Omega Statistics holds an A+ rating with the Better Business Bureau.

Eisenbeisz works as a contract statistician providing study design and data analysis for private researchers and biotech startups as well as for larger companies such as Allergan and Rio Tinto Minerals. Throughout her tenure as a private practice statistician, she has published work with researchers and colleagues in peer-reviewed journals. You can reach her at (877) 461-7226 or elaine@OmegaStatistics.com.