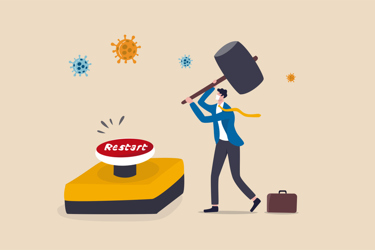 When Amylyx Pharmaceuticals began its PEGASUS trial for patients with Alzheimer’s disease, it had no idea the trial would be disrupted by COVID-19, or that the pandemic would necessitate taking the trial to patient’s homes. Yet that is exactly the situation the company had to deal with.

The route Amylyx is taking to regulatory approval is a bit different from the path taken by companies in the past. In a field like Alzheimer's, Phase 3 trials tend to be large global studies. Amylyx is hoping to conduct a much smaller trial that will still generate a data set that provides the company, partners, physicians, and patients with confidence in the product.

“Our goal is to leverage advances that have been made in the last few years in neural imaging and fluid biomarker assessments,” says Kent Leslie, CSO for Amylyx. “We want to walk away from this study knowing our drug is doing what we expect it to. I think the worst thing a company can do is run a very large trial and then find the drug did not perform as expected. Our goal was to create a smaller and concentrated deep phenotyping study to gain needed insights into what our drug is doing and confirm that what we saw in animal models bears itself out in patients.”

A New Approach To Alzheimer’s

The PEGASUS trial enrolled 95 patients. Because Amylyx is not targeting a distinct pathology in Alzheimer's, the company had the benefit of being able to enroll patients at all stages of disease. Leslie notes there is an emerging hypothesis in Alzheimer's that amyloid can be accumulating in the brain for decades prior to the emergence of cognitive symptoms and other downstream functional impacts.

“Our belief is that if there are neurons dying, then there is value we can provide at every stage of the disease,” says Leslie. “We don’t know if there are different biological drivers in patients based on whether they are in early or later stages of the disease. Therefore, it is in our best interest to figure that out early on. We do not want to run a large Phase 3 trial in patients and then find out that, biologically, they would not be expected to respond to the treatment.”

The goal of Amylyx is to enroll a broad patient population and characterize them from a biological and imaging standpoint, looking at spinal fluid and plasma to get a sense for what characterizes both early and late stage patients. Hopefully, the company will also characterize potential responders to its treatment. Later, when the company is planning a much larger trial, biological markers can be used to stratify and target the best responders.

The Impact Of COVID

Amylyx had planned to enroll 100 patients in the Alzheimer’s study but ended up capping recruitment at 95 when the COVID-19 pandemic hit and it became obvious patients could not complete their visits.

“At that time sites were closing,” says Leslie. “For our study we were working with academic medical centers in very large urban American cities. Sites included Mount Sinai Health System and Columbia University in New York City, The University of Pennsylvania in Philadelphia, and Mass General in Boston. These sites were discussing shutting down virtually every elective procedure for a few months. Participation in a clinical trial is elective and something that tends to take up a lot of resources. Trials also bring a lot of patients onsite. We knew that during a pandemic the site’s resources can be better utilized.”

In addition to ending recruitment early, Amylyx also changed the study design to ensure critical study data could still be collected from patients who could not visit clinics. Leslie notes Amylyx could not ask patients to take the treatment and call if they experienced an adverse effect. That approach would not be patient centric.

“We felt we needed to be proactive,” he states. “We decided that every six weeks someone would go to their home. A phlebotomist would collect blood when necessary and patients would be called every few weeks to make sure nothing changed with their cognitive symptoms. With the mad scramble for virtual technologies, it took us about four weeks to get that model in place.”

Some procedures, such as MRIs and spinal taps, must be done in a clinic. Unfortunately, many of those had to be delayed.

For Alzheimer’s patients, researchers need to collect cognitive data. The Montreal Cognitive Assessment and Alzheimer’s Disease Assessment Scale are tools used to detect cognitive impairment. For years, the industry was told the data could be collected by video or phone call. COVID necessitated making that model a reality for Amylyx and other sponsor companies. Initially some sites did not have access to  Zoom technology, and many patients were not familiar with it. It took only a few months for the familiarity to increase, and Leslie notes most people are now comfortable using it.

Amylyx also initiated a new quality control system that monitored patient data collected from home to see if it matched data collected in the clinic. Statisticians determined the data looked appropriate with no unexplained fluctuations.

“March and April were incredibly hectic months,” says Leslie, contemplating the work his company did to survive the pandemic. “We were working with sites that were shut down, rescheduling visits, and getting at-home nurses involved in the trial. We also had to figure out how to get medicines to patients and collect data from them when we were not allowed to know who they were.”

Leslie believes the changes made to trials in 2020 will continue to impact patients in the future. In fact, he believes remote visits are likely to be the new norm in the industry.

“I see a greater willingness from regulators, physicians, and sponsor companies to try these new technologies,” adds Leslie. “I have heard that most trials being proposed for different dementias, including Alzheimer's, will feature remote testing and fewer in-person visits. We initially felt we needed to bring patients to the clinic to keep them engaged. We now believe these patients are already highly engaged, and do not need to travel to NYC or Philadelphia every three weeks for a 30-minute visit. They can stay engaged by using the phone or video. This was a learning experience for us, and these advancements will be good for the industry.”