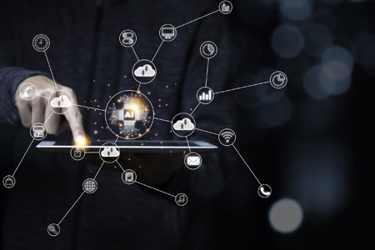 Looking back on 2020, Christoph Koenen, EVP and chief medical officer at Otsuka Pharmaceutical Companies (U.S.) notes there was an explosion in the advancement of digital technologies in clinical trials. While other companies scrambled to implement technology tools to deal with the pandemic, he notes that Otsuka was an early adopter of tools such as eCRF and eConsent.

“Traditionally, Otsuka always has had a great interest in using digital technologies in our clinical trials,” he says. “These technologies were standards in our trials – they were not optional. Virtual visits for patients and virtual monitoring have been backup solutions in our trials for years. I feel that early adoption gave us an advantage in 2020 over other companies that were not early adopters.”

Looking forward to 2021 and beyond, Otsuka hopes to continuously build on the technologies it has in place while engaging with new and emerging digital solutions. The implementation of new technologies will often require partnerships. When it comes to digital technologies, Koenen notes that there is only so much Otsuka can do on its own.

“We know there’s a lot more we are capable of doing in partnership with companies that are focused on the development and utilization of technology solutions. For us, the main thing that has changed over the last 12 months is our willingness and ability to go all in when it comes to using digital technologies.”

In the past, Otsuka had virtual monitoring and virtual visits in place to prove they worked and could be used if needed. The technologies were available, and staff knew how to use them. What changed over the past 12 months is that the use of those technologies was no longer optional. Virtual interactions had to be used to ensure the safety of patients and the success of clinical trials. Virtual contact with some patients also became mandatory when some sites were physically closed. Therefore, the work performed prior to the pandemic had Otsuka well in front of the curve.

“Owning a smartphone should not be a prerequisite for participation in a clinical trial.”

What Is The Risk?

At one time, companies considered the adoption of new technologies to be a risk. Koenen notes that Otsuka always performed risk assessments prior to implementation as a standard business practice. This was done to determine if the risk of adopting a new technology was greater than the risk of not doing it. He states that his company always viewed the long-term risk of not adopting digital technologies as being greater than the risk of adopting them.

“As part of the risk reduction process, Otsuka will build redundancies into its clinical trial process,” says Koenen. “Although a trial might require some face-to-face visits, virtual visits would be included as a backup plan. COVID changed that model by making virtual visits mandatory to protect the health of patients. When that happened, discussions about the risks of those models suddenly seemed to go away.”

For companies now using digital technologies, Koenen believes the adoption risk has dropped considerably. This is due to companies becoming more comfortable and experienced with using the technologies, as well as guidance released by regulators. In fact, Koenen now hears the risk argument coming up far less frequently.

A bigger concern for many drug developers right now has to do with patient diversity. Koenen believes the industry has an obligation to do something about that issue. When it comes to recruitment, he wants clinical trial populations to closely resemble the populations that will be served by the treatments. The benefits of using digital technologies are obvious. The problem is the digital divide that exists and was clearly exposed by student remote learning that took place in 2020. There are families that simply do not have access to the same technologies that exist in other households.

“As sponsor companies for clinical studies, we have to help overcome that divide,” says Koenen. “It is not that difficult to do. For example, owning a smartphone is great. But owning a smartphone should not be a prerequisite for participation in a clinical trial. If a smartphone is required to participate in a trial, and a patient wants to use their own, that’s great. We will let them do so. But if they don’t have one, then sponsors will need to provide them with a device.”

That device can be a smartphone or another piece of technology that caters more toward use in a clinical trial. For example, one solution Otsuka is investigating right now is placement of a digital device in a home that will allow for interactions with a healthcare provider. That device could also perform other tasks such as collecting EKG data or dispensing a pill.

“These devices will be specifically designed for use in a clinical trial,” adds Koenen. “It may not have any other use outside of that trial. As sponsor companies, we need to discover solutions that will allow us to overcome that digital divide. We must be as accommodating as possible to the trial participants.”

Koenen believes there were many lessons learned from managing trials during the COVID pandemic. One thing that stands out to him was the speed at which pharma companies drove change and innovation in their clinical trials. He hopes that spirit of innovation will continue in the industry once the pandemic has passed.

When thinking about what the industry could have done better, Koenen points to soliciting feedback from patients. In March, when the pandemic came crashing down, many trials were brought to a halt. In retrospect, he thinks there could have been more flexibility.

“Some companies were certainly more flexible than others, but I feel too many trials that patients depend on were completely shut down,” he says. “For some trials, that action made sense. It may also have made sense to halt the recruitment for some trials. But I also believe there was an opportunity for us to talk to our patient populations and get their input on whether or not to continue to run the ongoing trials, especially in cases where virtual or digital technologies were at our disposal. If this situation were to occur again, I believe there will be a much more seamless transition from brick-and-mortar visits to virtual interactions.”

“I personally feel the industry will keep a lot of these innovations made in the past year,” continues Koenen. “I believe we will not be going back to how trials were conducted in the past. I think there will be a push by some in the industry to revert back to pre-pandemic trials. That will happen anytime you implement changes so quickly, and there will always be reasons to do that. However, I think the industry, the scientific community, and regulators will hold each other accountable to make sure that doesn’t happen. The benefit to patients is too important to ever go back. I feel there is a consensus to not let that happen.”