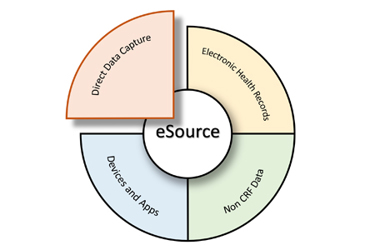 Direct Data Capture (DDC) is one of the four types of eSource and is often what people first think of as eSource. Direct data capture is the process of entering data into the eCRF contemporaneously, rather than transcribing from other sources such as paper or site EHR systems.

Some technology providers believe that EDC systems can be used as eSource, where the web based EDC system is carried around on a laptop, or potentially a tablet, and data is entered directly into this system. The big problem is that such EDC systems are designed for the sponsor and don’t take into account site preferences or workflow.

At Cmed Technology we have a purpose-built eSource app, to work on tablets and specifically designed for sites. While there are similarities to an EDC system there are subtle but important differences. For example, we designed the encapsia eSource app not only to collect sponsor required CRF data, but also the process data required by sites. In addition, sites can use the tablet’s camera and microphone to attach additional notes and multimedia records. The app enables fast data entry with an intuitive user interface that behaves like the apps we all use in our daily lives. On top of this, the encapsia Direct Data Capture App works seamlessly offline, allowing sites with varying internet connectivity to enjoy an uninterrupted experience.