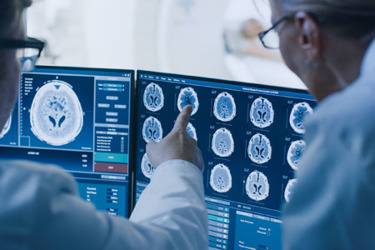 Glioblastoma multiforme (GBM) is an aggressive and fatal form of brain cancer that can form in the brain or spinal cord. Unfortunately, drug development for patients with the disease has not seen much progress in decades. Dr. Fahar Merchant, president and CEO of Medicenna Therapeutics, a clinical stage immunotherapy company, is hoping to change that.

“There are two primary reasons why we have not seen a lot of progress in glioblastoma from a clinical perspective,” says Merchant. “The first is the challenge of delivering a drug to a tumor that must cross the blood-brain barrier. With brain cancer, pills and IV infusions have not been very successful due to limitations regarding the effective dose that can cross into the brain. The other issue is that checkpoint inhibitors, which do help some cancer patients, are not effective on “cold” immunosuppressive tumors. Unfortunately, glioblastoma is one of those tumors.”

A third problem has been a steady stream of failures in Phase 3 trials. Merchant notes that while good data has emerged from open label Phase 2 clinical trials, many of those studies still failed once they got to Phase 3. He believes the main reason is that the patient population used in the single arm Phase 2 trials is often poorly defined and survival assumptions in the control arm, used in the design of a more robust Phase 3 trial, are therefore not reliable.

GBM is a heterogeneous type of brain cancer and classified as a Grade 4 glioma. Phase 2 trials tend to be open label, single arm studies that cover a wide swath of the GBM patient population with broad inclusion and exclusion criteria and often includes patients with Grade 3 gliomas. According to Merchant, the data gathered from those patients may look good in a Phase 2 study. However, if a Phase 3 study enrolls the same patient population, researchers could find that, once unblinded, patients in the control arm seem to perform just as well, indicating that the Phase 2 trial provided a false efficacy signal.

“I think we are learning that we need to have a patient population that is better defined,” says Merchant. “That being the case, it can be difficult to plan and predict your Phase 3 trial based on data gathered in Phase 2 studies. Historical control data or published literature may tell us the median survival rate in patients with recurrent GBM is six to nine months. We can assume that when we design our Phase 3 clinical trial, but the assumption may not be correct. If that happens, the result will be a failed study, which is the challenge we frequently face.”

Recruiting patients for a GBM study is difficult, and the broader the inclusion criteria, the more likely it is that a trial will meet its recruitment goals. That situation also creates a critical paradox for drug developers. In the Phase 2 trial, do you allow broad inclusion criteria that will speed recruitment at the risk of getting an unreliable efficacy signal or do you take a little longer and recruit a well-defined GBM population that will provide a reliable go/no-go decision and fit the objectives of the Phase 3 clinical trial?

“One route will get you the patients you need but will result in a higher failure rate in Phase 3 trials,” states Merchant. “The other will be more difficult to recruit, which could result in the trial being delayed or cancelled. This is a real challenge that companies face.”

Medicenna made the decision to go with what it felt was a better defined but a more challenging patient population for the Phase 2 study of MDNA55, its drug candidate for GBM. It is a fusion of a highly specific interleukin-4 and a bacterial toxin that targets the overexpressed IL-4 receptor on the GBM tumors but not present in healthy brain cells. Once it binds to the receptor and gets taken into the tumor cell, MDNA55 releases its toxic payload to kill the tumor from within.

The company set out to deliberately select a patient population for the Phase 2 trial who would be more difficult to recruit and treat — specifically those with recurrent GBM tumors who had biomarkers and other features that suggested a poor prognosis. The goal was to recruit enough patients from this well-defined population who would help produce a reliable efficacy signal and, at the same time, de-risk MDNA55’s eventual Phase 3 study.

“With GBM, the recurrent patients are obviously not doing as well as the newly diagnosed patients,” says Merchant. “The recurrent patients also tend to have inaccessible tumors that are deeper, meaning surgery is not an option. Patients with those inaccessible tumors have poor survival outcomes. Unfortunately, three out of four patients who relapse are no longer candidates for surgery. That is a large percentage of the patient population who are in want of better treatment options.”

And so, Medicenna opted to include only recurrent patients who were not qualified for a second surgery in its study. Next, the company excluded patients with other lower grade gliomas. That means a patient first diagnosed with a grade two or grade three glioma (who have better survival outcomes) could not enter the study, a criterion that was generally not used in competitor GBM trials. Thus, the company only enrolled patients who relapsed following initial diagnosis of grade 4 GBM and had their tumor that could not be surgically removed.

Finally, Medicenna also excluded a group of patients from the study who had biomarkers that suggested a better prognosis, such as patients with a tumor carrying an IDH mutation. That left Medicenna with a patient population with the poorest prognosis, which the company felt was much better defined and would provide a reliable efficacy signal for MDNA55. It also would help to reduce variabilities that could arise in a Phase 3 trial.

Don’t Rely Only on Published Literature

Once Medicenna had the right patient population selected, it opted to make one other change to how it would conduct its clinical studies. Past trials relied on external published literature with respect to the expected survival rate of patients. The company chose to conduct a separate Phase 2 study with patients in an external control arm. The external control arm (also called synthetic control arm) would match the patients in the investigational arm of the trial to historical patient data in recurrent GBM patient registries going back five years. This was done to ensure that a six- to nine-month survival rate was the right number to be used when designing a Phase 3 trial.

“The external control arm study included patients using the same inclusion and exclusion criteria that we had in our Phase 2b trial,” states Merchant. “We matched those patients based on 11 different prognostic factors, including age, tumor size and location, and genetic makeup of the tumor. We knew those 11 factors impacted survival rates in patients with GBM.”

The difference in the survival rate was found to be quite dramatic. In the external control arm, the median survival time for patients who received the standard of care was 7.2 months. In the MDNA55 treatment arm, the survival time was 15.7 months.

“We were reassured with these results,” says Merchant. “We did not simply pick a number from published literature and use it to predict the survival rate. Our study gave us a lot of confidence in the numbers we generated, which would be the basis of our research going forward and the meeting we held with the FDA.”

Once Medicenna knew which patients it was targeting in the external control arm, it was able to engage with hospitals and cancer centers that work with GBM patients. Patient registries were also helpful in locating patients who had previously agreed to informed consent, enabling hospitals with the inclusion and exclusion criteria to locate eligible patients. However, one concern for Medicenna was missing patient data.

“In order to include patients in our ECA we needed to make sure that there was no data missing,” stresses Merchant. “That was important because we were looking for very specific GBM patients. We needed to know their dates of treatment, the dates of relapse, tumor size and location, and much more. That data requirement significantly narrowed the available patient population. We were not able to simply pull data from a patient registry. We had to carefully funnel that information down to those patients that specifically met our inclusion/exclusion criteria.”

Merchant notes that being selective with patient recruitment did create some challenges for the Phase 2 trial. However, using an external control arm allowed all 47 of the recruited patients to access the study drug, which many are desperate to receive, since these patients do not have an effective treatment option.

“There is really nothing out there for them,” says Merchant. “These patients want a treatment that will help them, and do not care to be part of a control arm. When they volunteer to be part of a clinical trial, their expectation is that they will receive the new treatment. The existing standard of care is not the reason patients choose to be in a trial. That has been a challenge for us.”

“We felt this design was the right way to go for MDNA55,” adds Merchant. “The number of patients we used meant a faster, easier, quicker, and more ethical clinical trial. We were able to directly compare survival rates between our treatment and the standard of care with no sacrifice in quality. Also, matching patients on those 11 prognostic factors is something you can’t do in a randomized controlled trial. This is the first-ever registration trial approved by the FDA that included an external control arm. The control arm we created was robust, and we believe it will set the stage for future clinical trials.”

Medicenna is working with the FDA to finalize the protocol and expects to start its Phase 3 trial for MDNA55 in 2022.