Humans And Machines Will Partner For Better Outcomes 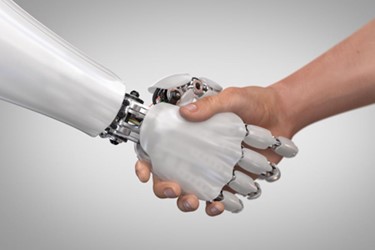 Dr. Emmanuel Fombu spends a lot of time thinking about healthcare. He’s a trained physician and currently leads global strategy and digital innovation at Johnson & Johnson. He notes that when you step into an Uber, all the driver needs from you is an address. No directions are required, because drivers have a GPS device to guide them to a destination. Unfortunately, wo do not have that kind of a map in healthcare. Your doctor asks a question, you supply an answer, and this begins the process of trying to figure out what might be wrong with you.

Your DNA certainly has an impact on your overall health, but lifestyle is another important factor that can’t be overlooked. Some diseases are inherited, whereas others are more directly impacted by how you live. Fombu notes his grandmother, who was born and raised in Cameroon, was a heavy smoker. She had diabetes and hypertension and died from heart failure. Fombu’s mother grew up in the U.S. She has a PhD, better access to healthcare, and still works out every day. She has neither diabetes nor hypertension, and neither does he.

“When I go to my doctor, he will ask if anyone in my family has a history of diabetes and hypertension,” he says. “The answer is yes, but how does that translate into risk for me? From my example, it’s clear there is more to this than just genetics. There are environmental factors that must be considered as well.”

Everything Affects Your Health

Fombu gives one additional example: St. Louis, MO. There is a street in St. Louis called Delmar Boulevard, which crosses the city from east to west. Around St. Louis it is better known as the Delmar divide or simply ‘the dividing line.’ If you look at the northern part of St. louis above the divide, you see a population that is 99 percent African American with a low socioeconomic background. There are many poverty-stricken areas featuring liquor stores, fast food restaurants, and decaying houses. The area below the line is more educated and affluent. Here you see million-dollar mansions, wine bars, fine restaurants, and health clubs. The population is 70 percent white.

“This one street separates the rich from the poor,” says Fombu. “It also separates the healthy from the unhealthy. The rates of cancer and diabetes are seven times higher above the Delmar divide.”

Your Diet Is Your Health

Clinical trials are impacted by the divide as well. Pharma has been working to make patient participation in trials more diverse. Fombu questions how many clinical sites are located to the north and south of the Delmar divide. “We have very few females and minorities participating in clinical studies,” he says. “This situation plays out over and over, but no one ever seems to question why we have so few sites in minority locations. Lifestyle has a significant impact on healthcare costs. Until we start taking a close look at what impacts healthcare, we will never address some of the core health issues.”

Today, close to 50 percent of the world’s population has a chronic disease. It is now a $47 trillion market. Cardiovascular disease falls into the category, and it is normally partnered with high cholesterol and hypertension. Asthma, chronic obstructive pulmonary disease (COPD), cancer, diabetes, and mental illness are others, and all are impacted by a either a patient’s environment, genetics, or both.

“Today researchers spend a lot of time focusing on EHR and EMR data,” says Fombu. “But we need to think bigger. Every bit of information that we generate every single day is healthcare data.  We should not be looking at healthcare data separately from the daily pictures that you post on Facebook or Instagram. This could be a picture you post of what you cooked at home. The restaurant that you checked into. The meal you ordered from that restaurant. What you eat is part of your health. We focus on what we tell our doctors, but if I spent all day yesterday eating sushi, that’s part of my health. That plays a role in it. If I ate three burgers or a plate of fried chicken, or if I had a couple of shots of whiskey or four glasses of wine, all of that is relevant data because my body reacts to it.”

It’s easy to understand how all of that might impact your health. It’s a bit more difficult to understand how we might capture that data and use it to help patients and clinical research. First, we must recognize that there are many types of data. There is health data, medication data, demographic data, and even encounters with people. For example, running into your ex-spouse can cause stress and result in an increase in your heart rate. That is usable, real-time data. All of this can now be tracked via wearable devices.

“With the wearable devices currently available we can track what you post on Facebook and monitor your vital signs,” states Fombu. “We can then use all of that data to create a holistic view of your health. It’s impossible for any doctor to determine what you ate yesterday, what time you got up, and who you met at 3:15 pm that caused your blood pressure to rise. But, with the technology we have today, we can finally capture that data in real time and build connected models around it. We can even build mathematical models to predict the risk of having certain health problems in the future.”

For example, one study Fombu designed and led looked at the relationship between sleep and activity in heart failure patients. The hypothesis was that if a person slept good at night, there was a greater likelihood of them being more active the next day. A Phillips activity tracker had the ability to capture light exposure. This allowed researchers to determine when patients were going to bed and when they woke up. The watch also measured each patient’s activity level. The study enrolled 140 patients in approximately 18 months and was conducted over three months.

“The device measured activity but not heartrate,” states Fombu. “One patient died during the study. When we looked at her baseline activity, we found the time she went to bed and got up was consistent for weeks up until 4 days before she died when there was some inconsistency.  Afterwards, researchers determined she had multiple strokes four days before she died. In the future, algorithms used in a clinical trial could be used to predict these events. We can now monitor data on a continuous basis. When a patient’s activity changes, that’s a sign that something might be wrong. A change in baseline data might mean it’s time to intervene.”

Another study looked at patients with multiple sclerosis (MS). The activity of these patients will gradually decrease over time, but most patients wouldn’t be able to tell you if they are less active today than they were six months ago. Here again, baseline activity for a patient can be monitored over a period of time, with activity monitored in real time.

“We now have the ability to identify patients with the disease much earlier,” says Fombu. “We do not have to wait until they become sick. We are intervening ahead of time. We can now provide a device to every clinical trial patient that has heart disease, hypertension, or MS. We can monitor them in real time and know when someone requires an intervention. That is real value that pharma can provide.”

Technology and apps now allow pharma to show how it’s products can change behaviors and create better outcomes. Fombu believes this will enable companies to go back to regulators and ask for additional outcomes to be added to labels. He believes clinical trials in the future will not only have drug placebo arms, but drug placebo arms plus a device to enable sponsors to study drug-device combinations.