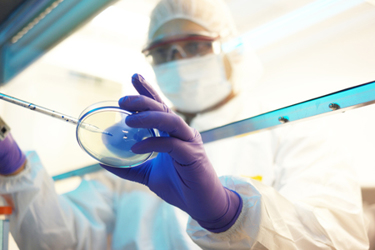 Dr. Ian Walters has spent 21 years developing cancer treatments for patients, and during that time he has helped get five cancer drugs approved by regulators. At Bristol Myers Squib (BMS), Walters was the executive who oversaw oncology clinical trials. He also worked on the business development side of the house, evaluating small biotech firms. While performing that work, he noticed a disturbing trend in the industry. Big Pharma companies would often lament that small biotech firms do not develop drugs the same way it is done at large companies. Oftentimes, they also do not generate the right data. That would lead many large pharma companies to question whether they should take a risk on a small biotech instead of just doubling down on their own efforts.

“At some point a light bulb went off in my mind,” says Walters, the chairman and CEO of Portage Biotech. “I realized pharma will never change. For small companies to be attractive to Big Pharma, they would need to change how they conduct drug development. I made the decision to leverage my MBA from Wharton, start a new company, and focus on evaluating and prioritizing investments in the life sciences.”

Walters recruited a group of seasoned executives from BMS and built a nimble company to develop drugs the way pharma wants to see them developed, with the goal of later licensing or selling the products to pharma. The company takes a bit more risk with respect to new modalities, pathways, and compounds.

“We are a publicly traded biotech run by ex-BMS employees executing a new model of drug development,” states Walters. “We have a lean structure with many partnerships with academia to keep our fixed costs low and have built a pipeline of 14 assets focused on activating the immune system to combat cancer. Four of those assets are currently in clinical trials.”

Walters believes there is a standard growth model used by most biotech firms. A company will start with 10 or 12 employees. After its first financing series, it might grow to 30 or 40 employees. When additional financing is raised, the company might relocate to a larger office and grow to 100 people. The company will then do an IPO and become a $500 million company. The goal is to get to human proof-of-concept as quickly as possible, since that is what really unlocks the value of the company.

Walters believes he has created a new business model that is lean and efficient and will overcome the challenges faced by small firms. “The Portage model has the same goal, which is to get to human proof-of-concept as quickly as possible,” says Walters. “However, instead of getting there with 100 employees and an expensive office in the Massachusetts biotech corridor, we do it with 10 senior people working virtually. If you look at our burn rate, it is substantially lower than the rate you see in other biotech firms.”

Although Portage has raised less money than other companies, it has been efficient with its cash. In fact, the company was able to take its first drug to the clinic with just two employees. For its FDA submissions, Portage is leveraging industrial know-how and best practices created over decades of successful drug development at big pharma. For the expertise it needs, Portage has engaged with many of the same contractors that work with big pharma.

There are several key factors that Walters attributes to the company’s success. The first is the belief that biotech firms should not get too big too fast. Walters does not believe a large company is necessary to the success of the firm.

“Many small companies will hire experts with advanced degrees, locate in office space in Cambridge or San Francisco, and build out complex laboratories,” he states. “That will result in fixed, personnel, and capital costs that are through the roof. Our strategy is to keep those costs as low as possible.”

He says another key feature of the Portage model is surrounding yourself with people who are veterans in your specific therapeutic area. Those experts will be aware of the roadblocks likely to arise. Walters believes developing drugs can be like navigating a minefield. Therefore, you need to be surrounded by individuals who have successfully crossed that minefield on numerous occasions. They will be aware of the hidden dangers and will know the quickest and safest path.

The professional network Walters taps into is comprised of individuals who have been in the industry for 20 to 30 years. He will hire those individuals as consultants, particularly when performing diligence on new technologies. If that technology is purchased, the consultant might be hired part-time or become an advisor to the product. Portage will also use that extended network to ensure it has a seasoned executive involved in every discipline required for drug development. By avoiding the large infrastructure costs, invested capital can go straight to value creation and R&D.

Portage was able to raise a small amount of capital to get the company through to a Phase 2 study. A grant received from EU Horizon 2020 funded the company’s second asset, including the preclinical work, animal studies, manufacturing, toxicology, and the first-in-human study.

“We are very efficient with our money,” states Walters. “For example, we recently announced a collaborative research and development agreement with the National Cancer Institute (NCI). We do not have our own labs, so we hired a postdoc who works at the NCI. We pay that person a salary and the NCI is our virtual lab. This trade agreement covers three of our assets and is just one way that we can extend our reach without spending a lot of money.”

Portage has announced another deal with a major academic institution. The company provides the lab with the investigational compound and the university conducts the testing. No cash is exchanged. By leveraging this larger academic network, Portage can maintain a smaller, less expensive footprint that can be more easily maintained during tough economic times. The goal is to do all work in-house or with academic partners, and then selectively outsource to service providers as needed.

Is This A Good Time To Acquire Assets?

Another aspect of the Portage model involves locating the right assets. Sometimes that will involve purchasing assets from other companies. For a small company, there are several factors that must be considered before acquiring an asset. According to Walters, the most important is the ongoing expense of a new compound.

“If you acquire a new asset, you immediately have more mouths to feed,” he says. “That means you may also require access to capital markets. Right now, it is not clear when the financing markets are going to reopen. That is a dichotomy that small companies must deal with. Portage was creative in how we funded our most recent transaction. Based on our skill sets and staffing levels, we did not require any significant increase in head count.”

Along with that acquisition, Portage also entered into a committed share purchase agreement with Lincoln Park Capital. Under the terms of the purchase agreement, Portage will have the right at its sole discretion, but not the obligation, to sell up to $30 million worth of its ordinary shares over the 36-month term based on prevailing market prices. This commitment helps support the incremental development costs while providing significant financial flexibility to enable advancement of Portage’s existing pipeline of novel immunotherapy treatments.

“We had enough cash on our balance sheet that we didn't have an immediate need for the cash,” says Walters. “The commitment meant we could talk to other companies to negotiate favorable deals. There are 175 companies currently trading below their cash holdings. I heard that 40% of biotech companies do not have sufficient cash resources to fund operations for the next 12 months. Some of them will not be able to raise the cash they need and will fail. Eventually investors will return to the market, but until that happens, we are in an advantageous position to take advantage of any opportunities that arise.”

A final aspect of the Portage strategy is its relationship with Big Pharma companies. Portage will often engage with those companies early in the development cycle. Walters looks for companies he believes are most likely to buy and license the products. Even before introducing a pharma company to its product, Portage will ask those companies what they would most like to see from the product. Portage then has a clear understanding of what is needed to get the products to a point where a Big Pharma company will be willing to purchase the asset. Portage will then plot the straightest course to acquire the needed data.

“Pharma companies help us identify the end game and we plot the quickest path to get there,” says Walters. “I believe having successful drug hunters in your company is about 20% of the challenge. The other 80% is knowing what to do when an experiment does not go as expected. Drug development is not a linear, straightforward process. Oftentimes you need to change course quickly. The only way companies will learn the other 80% is by having experienced it. When something does not go as expected, do you drop the asset or move in a different direction? Our goal is always to find the best path to get a drug into the clinic and spend the least amount of money on something that does not have potential. We believe this model will help us do that and improve patient lives and increase survival by avoiding and overcoming cancer treatment resistance.”