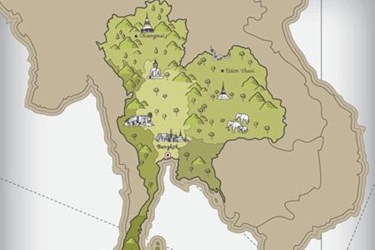 Up until now, these underlying benefits for conducting clinical research have not been fully realized in Thailand, even as other countries in the region, including South Korea and Taiwan, have been able to successfully attract clinical trials. For the period 2010-2015, over 4,000 clinical trials commenced in South Korea and while another 2,000 were started in Taiwan. In contrast, fewer than 1,000 were started in Thailand.

However, that situation may now be changing. A new report finds Thailand has been the leading conductor of clinical research in pharmaceuticals among all ASEAN (Association of Southeast Asian Nations) countries for the past five years. The Pharmaceutical Research and Manufacturers Association (PReMA) in Thailand commissioned Deloitte Access Economics to provide a detailed and objective analysis of the economic and health related benefits of clinical research in Thailand. The Deloitte team adopted a mixed methods approach to the study which included a survey, interviews and desktop analysis.

The survey was presented to members of PReMA as well as clinical research organizations and universities. The purpose was to ascertain trial employment and cost data, the number of local participants and sites, and challenges and opportunities for clinical research in Thailand. Face-to-face stakeholder interviews were also performed to further explore survey findings and to collect qualitative information. Sources referenced in the study included clinical trial databases (such as clinicaltrials.gov and the Thai Clinical Trials Registry), government departments (such as the Ministry of Public Health, and the Office of the National Economic and Social Development Board), and published papers.

With the information in hand, Deloitte prepared a Strengths Weaknesses Opportunities and Threats (SWOT) analysis and policy recommendations. The benefits investigated included:

Direct and indirect economic contribution. This measurement was a broad equivalent to the addition to Thailand’s gross domestic product (GDP) made by both the organizations conducting clinical trials and the businesses supplying goods and services to those organizations. For example, if a pharmaceutical company engages a contract research organization (CRO) to conduct a trial, the value added includes not only the profit earned by the CRO, but also those earned by the electricity utility, medical equipment makers, and data storage companies supplying the goods and services used in the trial.

Economic value of medicines produced. Companies pay for trials in the hope that the research will eventually result in a regulatory approval and a new medicine coming to market. Clinical trials are expensive and take a long time to complete. Unfortunately, most also do not result in a new medicine getting to patients. Even when a medicine is approved, there is only a limited patent period under which firms must recoup their development costs and earn a profit. The report attempted to estimate the long-term economic value of medicines produced as a result of clinical trials conducted in Thailand in 2015.

Health benefits. Most long run improvements in health are due to better medicines and medical devices, which are the result of medical research. Most of that research is in the form of clinical trials. While most of these benefits accruing to the Thai population will be from international trials, some will also be due to trials conducted in Thailand. This report used standard techniques to assign a financial value to the years of healthy life gained as a result of the research conducted in Thailand.

Once these benefits were determined, they were compared to the costs of conducting clinical trials in Thailand in 2015 using a cost benefit analysis framework.

Patients And Skills Are Primary Drivers

The SWOT analysis found the two factors were the most important to attracting foreign clinical trial investment to Thailand. One was the large treatment-naïve patient population found in the country, which goes across many disease profiles. The other is the country’s highly skilled workforce. There is an increasing density of pharmacists coupled with a significant presence of research-based pharma companies and CROs. Other strengths included a high cost-effectiveness in hosting trials, a high incidence of tropical diseases, and access to state-of-the-art, readily available medical equipment and facilities infrastructure.

The flip-side of those strengths are the weaknesses, with the lengthiness of the independent ethical approval process and the import license approval process being the biggest impediments to increased foreign investment in clinical research. There is a limited number of FDA accredited IEC (Independent Ethics Committee) and FDA approvers, and mandatory approval processes are run sequentially rather than in parallel. Other weaknesses included the lack of government funding for trials, limited experience in early-stage trials, and strategy and policies in research areas being too focused on the short term.

Identified threats include a domestic dependency on value added rather than value creation, a low collaboration rate amongst stakeholders, a growth potential not scalable with available talent, and an increased reliance on effective intellectual property protection.

Opportunities include the country’s economic growth potential, the potential to attract foreign medical specialists as demand increases, increased submission and registration fees to address governmental funding gaps, and the trend of private hospitals entering into the clinical trial research market.

Some of the numbers that came out of the analysis back up these findings. Deloitte estimated that approximately $320 million was spent on Thailand trials in 2015, with the majority of that (75 percent) spent on Phase 3 research. Only around three percent of total trial costs were spent on Phase 1 research. That same year saw 111,000 Thais participate in a clinical trial, with 38 percent of those trials sponsored by pharma companies. Clinical trials contributed $270 million to Thailand’s GDP, which represented 0.05% of its GDP for 2015. Trials conducted in 2015 are expected to generate a 4.2 percent rate of return in net present values. The long-term economic return of medicines produced from those trials is expected to be $13.4 million.