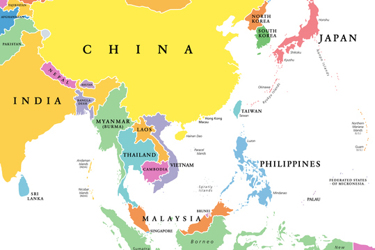 Right now, no place in the world is a hotter spot to conduct clinical trials that the Asian-Pacific region (APAC). This popularity of the region is not new. In 2018 China was one of the hottest topics of conversation I heard at the DIA Annual Meeting. Shortly thereafter I wrote an article that featured the insights of three experts on that region. A year later the region was still attracting a lot of excitement when I produced this piece  discussing how South Korea was a growing hot spot for trials. Today, the entire region remains an area of interest for clinical studies.

Consulting firm Beroe recently submitted an article to Clinical Leader on APAC, noting it is a hot spot due to the ease of regulatory compliance, the low cost of conducting studies, a growing patient population, and the presence of top clinical institutions. Those institutions include CROs. The report notes the APAC CRO market is valued at $7.6 billion in 2021 and is forecast to reach almost $12 billion by 2025, a CAGR of 12%. Global CROs in the industry, including IQVIA, PAREXEL, PPD (to be acquired by Thermo Fisher), Syneos Health, Covance (now LabCorp Drug Development), ICON, Eurofins, PRA Health (acquired by ICON), and others all have a presence in APAC. In fact, every one of the top 10 global CROs now have APAC operations. In some cases, specific sectors of their expertise, such as medical writing and biostatistics, are led out of APAC. Almost all mid-tier CROs now have APAC affiliates or in-country partners as well. You can add to that a cadre of excellent APAC CROs with headquarters in Asia such as Novotech, Wuxi AppTec, Shanghai ChemPartner, TigerMed, and ClinChoice (formerly FMD K&L).

China leads the way with the presence of 27 global CROs. They are followed by India and South Korea with 22, Singapore and Taiwan with 21, and Japan with 20. The 11 nations in APAC also are home to a growing number of regional CROs.

The presence of quality CROs is not the only reason to take a close look at APAC. I spoke to industry consultant and Clinical Leader Editorial Board member, Michael W. Young, principal at biomedwoRx: Life Sciences Consulting, for his take on the growing clinical popularity of the region.

“Cost is certainly a factor,” says Young. “The FTE rates in China are highly competitive, but many experts in the region report the real differences are found in the trial costs of data management, biostatistics, and laboratory testing including bioanalytics. Those costs can be 30% to 40% lower than they are in the U.S. and European countries. So in addition to the large available patient pool, streamlined regulations, improved intellectual property/legal rights, and favorable access to state-of-the-art technology, APAC offers a low-cost clinical ecosystem.”

Although the financial incentives are attractive, regulatory compliance has also been simplified over the years. Several years ago, Asian regulatory and government authorities realized their provincial systems were costing them money and opportunities. Pressure from in-country medical universities, CROs, and investment groups allowed many APAC countries to re-align their approval processes and trial requirements to better fit Western and global needs.

“This increased the volume and revenue from global and in-country trials,” observes Young. “Conducting trials in China has also improved since regulatory changes made in 2016. What used to take as much as two years is now a 10-month application process. The usual duration for the China State Food and Drug Administration (SFDA) to approve clinical trial applications has been cut in half. The regulatory reforms have also enhanced clinical trial review and approval. An updated IND review procedure was created in China in 2019 which has favorable implications on trial efficiency.”

“China’s regulatory procedures have been streamlined for market access by harmonizing drug development and clinical trials execution as well as adopting the International Council for Harmonization (ICH) guidelines,” adds Young. “In addition, several news sources have indicated that the Chinese Centre for Drug Evaluation (CDE) has increased the number of drug reviewers, which has reduced review timelines and increased the number of approvals.”

Although the globalization of clinical research is driving growth in Asia, making it a hot region for new, large indication trials, there are some challenges that remain for companies hoping to conduct research there. The first is the lingering impact of the COVID pandemic. Young notes the pandemic impacted trials all over the world, but the impact on APAC trials has been significant.

“In particular, the monitoring of sites and patients has been hampered if not crippled in many regions of APAC,” notes Young. “Japan and parts of China, and more recently, New Zealand, Taiwan, and the most populated areas of Australia are largely inaccessible for global trial conduct. It is unknown how long it will take to ‘normalize’ these circumstances.”

There are other concerns aside from COVID. Young states geopolitics in the APAC region need to be considered, especially for longer term (three to five years) studies.  Regulatory idiosyncrasies also remain in different regions of APAC. While huge strides have been made in recent years, especially in China, Singapore, and Taiwan, APAC remains a clinical development patchwork of regulations and requirements. As Decentralized Trials are still embryonic in much of APAC, the state of DCT should be assessed if planning such trials.

“Absentee management is frowned upon and establishing solid, reliable local management is expected,” says Young. “Undertaking clinical trials in Asia requires an appreciation that the regulatory protocols are often different. The IRB approval, import licensing, regulatory review, and contract negotiations are undertaken simultaneously in some countries, while others carry them out sequentially. Some APAC countries also have varying requirements for local language translation, import or export licensing, and requirements for data on local patients or the provision of ‘ethnobridging’ trial data.”

A Different Standard Of Care

In the US, Europe, and Australia, standard of care is generally provided by the payer during a clinical trial. This may be the relevant government agency or the patient’s insurer. In most Asian countries however, sponsors/CROs are required to pay for the standard of care. Young notes this is even the case in health systems with nationalized drug systems and government support such as Korea, Japan, and Taiwan. A number of published reports show that:

Still, even with these differences from Western trials, the total cost of running studies in Asia continues to provide cost savings of as much as 30% to 40% as compared with the U.S. and Western Europe.

Young cautions sponsor companies to be aware of a few other potential concerns, including transportation, IP and data security, language, cultural norms, and informed consent. Transportation issues exist in many APAC countries where the transport of study materials and tissue specimens are involved, and cold-chain or other time-sensitive transportation parameters must be considered when planning trials.

While IP and data security are not as much an issue as they were 10 years ago, they remain areas of scrutiny. English proficiency varies across Asia, so document translation should be done with local experts. Young recommends companies invest in back-translation from the local language to English to ensure the meaning of critical documents is preserved.

“Sponsors should also know there is a high value in professional hierarchy in many APAC countries,” adds Young. “Professional position, gender, and age play a major role in many Asian cultures. Maintaining a good reputation at the workplace and creating individual and community credibility is also important. Many of these factors contribute to operational norms, which are pivotal in business negotiations and in developing and maintaining relationships.

Finally, Asians also tend to prioritize family and group affiliations. Cultural traditions suggest many will place a strong emphasis on family connections, especially during illness. That means treatment decisions, including clinical trial participation, may require a broader discussion with family members prior to consent and enrollment.