Why Has There Been A Shift In Power In Pharma Partnering? 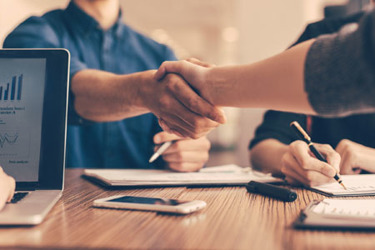 When it comes to partnering models in drug development, Syed Kazmi, CEO of Jubilant Therapeutics, believes there has been a dramatic shift in the thinking of pharma companies.

Kazmi has worked for both pharma and biotech companies and on both the business and R&D sides of the house. That gives him a unique perspective on and appreciation for how partnering has evolved.

“If we go back 10+ years, ‘innovation’ in drug development was often happening at small biotech companies that would come up with novel molecules and perform preclinical studies and an initial proof of concept,” says Kazmi. “But that is when they would run into challenges — the first of which was a lack of funding.” He explains that many of these biotech firms were run by academic scientists who did not have much experience in the business side of drug development. Faced with limited funding options, they often would have to either sell their assets outright to a Big Pharma or develop some sort of partnership.

Under that model, pharma companies often would step in, send the biotech a check, and then take over development of the asset. If a partnering model was put in place, there might be occasional milestone payments and a quarterly or semiannual joint committee meeting to provide updates on the development results. Still, Kazmi notes those meetings were essentially a formality since the partnering agreements were not a true collaboration. He notes this was more a “throw-the-asset-over-the-fence” model. “All of that has changed,” he says.

FROM COLLABORATIONS TO PARTNERSHIPS

Today’s biotech firms have recognized the need to adapt and change their strategies for developing innovative assets. Many of these companies are led by experienced pharma executives who are well versed in the business side of drug development. Consequently, Kazmi says — unlike his earlier days in Big Pharma — large pharma companies now have more respect for these smaller firms and recognize that “They know what they are doing.” Rather than rushing to bring assets in-house that seem to have potential, pharma companies have started to rely on these innovator companies to investigate and do some of the early clinical work on new drug candidates.

“To continue to have access to molecules at small companies, pharma had to change its mindset and find better ways to work with its partners,” says Kazmi. “I believe we will see more pharmas actively reaching out to smaller biotechs, which is a shift in the power structure of these kinds of partnering negotiations.” Pharmas bring extensive late development, regulatory, marketing, and access/reimbursement experience that biotechs can benefit immensely from to make the innovative medicines available to patients. While biotechs can access capital in the current funding environment, a joint development and commercialization model is proving to be a win-win solution for all stakeholders.

Kazmi says Big Pharma is paying more attention to the smaller firms, making their interests clear, and, once they are satisfied with the due diligence, they recognize that they might be competing with other pharmas to be the development partner. In doing so, pharma companies are coming up with innovative ways of demonstrating their interest to potential partners. For example, pharma companies are investing time and effort to share with innovators a thoughtful clinical development plan and potential label indications even for early-stage programs during the licensing process. He also sees Big Pharma CEOs and executive teams engaging with smaller firm CEOs and management during the partnership process on a much more regular basis than a decade ago.

“I believe we will see more pharmas actively reaching out to smaller biotechs, which is a shift in the power structure of these kinds of partnering negotiations."

“Pharma companies recognize that one biotech could have multiple pharma companies interested in its product. That definitely gives the smaller company negotiating strength when entering into partnering agreements.”

Regarding those partnering agreements, before it was rare for a biotech to retain the copromotion rights to an asset. Today, the smaller companies are not only considering copromotion rights during their negotiations, but they also often retain the rights to sell to certain geographies. Additionally, they frequently stipulate the role that the pharma company’s commercial and late-stage expertise will have in the partnership.

“We are now seeing a lot more mutual respect, trust, and confidence in potential partners on both sides,” adds Kazmi. “I tell folks I know at biotech firms to enjoy the position they are in. If you have a promising asset and the evidence to back the clinical and market need, you will attract attention. Talk to a lot of companies. Then negotiate and make a decision that is in your best interest. The business has changed, and I do not believe we will be going back to the days when Big Pharma called all the shots. That era is over as biotech firms have matured in their capabilities.”