Has Fitbit Shown Us The Future Of Clinical Trials? 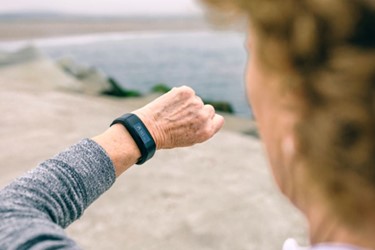 Do you happen to know your resting heart rate (RHR), which is the number of times per minute your heart beats when you are still and calm? Most individuals do not measure their heart rate. In fact, many are lucky to have it measured a couple times per year when they visit their physician. It’s probably a safe bet that most people do not even know what constitutes a healthy RHR.

If you own a Fitbit or other fitness tracker, you probably do. I know mine, only because a few years ago my wife gave me a Fitbit for my birthday. In addition to helping me track my daily steps, it provided me with information on my RHR. That prompted me to go online to figure out what, exactly, the numbers meant. I learned that a person’s RHR is generally between 60 and 100, and a lower number indicates a greater level of health. That started me on a trek to get more active and keep my RHR below 70 beats per minute.

The beauty of a Fitbit and other activity trackers is that they monitor your pulse continuously for days and months at a time. Extracting that data from millions of people would give us billions of hours of heart data, which is exactly what Fitbit now has. The company has compiled the biggest set of data ever collected about a person’s heart rate and how it is impacted by changes in their lifestyle. It may also be providing us with a glimpse of the future of clinical trials.

David Pogue, a tech columnist for Yahoo Finance, notes Fitbit has collected 150 billion hours of heart-rate data from tens of millions of people all over the world. In January, Fitbit gave Pogue a deep dive into the data it collected. A Fitbit measures a person’s heart rate, activity level, and sleep hours/patterns. When someone creates a Fitbit account, they also provide their age, sex, geographic location, height, and weight (don’t worry, the data is anonymized.) “In combination with the heart data, the result is a gold mine of revelations about human health,” says Pogue.

A Matter Of Life And Death

RHR can be looked at as a measure of your overall health. Scott McLean, principal R&D scientist at Fitbit, describes it as an informative metric in terms of lifestyle, health, and fitness as a whole. But it can also be used to predict your life span. A report published in 2011 by the Harvard Medical School notes one in every four deaths in the U.S. is caused by heart disease. The Copenhagen City Heart Study found that RHR is an independent risk factor for cardiovascular and all-cause mortality. Translation: Individuals with a high RHR are more likely to die from heart problems.

There is also a link between RHR and diabetes. Fitbit tracked 100,000 individuals in China for four years and found that for every 10 beats per minute increase in RHR, the risk of developing diabetes later in life was 23 percent higher.

While the Fitbit data confirms a lot of what cardiologists already know, Pogue notes the huge volume of data unearthed some surprises as well.

Fitbit found that women tend to have higher resting heart rates than men. That was not a surprise, as women tend to be smaller than men and have smaller hearts that need to work harder to keep blood circulating. But the data also showed that RHR, for both men and women, goes up as you approach middle age and then declines later in life. McLean notes that fact has never been reported in medical literature with much confidence. Children could be a factor, as they keep adults busier and cause them to exercise less and eat more fast food. RHR also increases as the heart ages and gets weaker.

The decline in RHR later in life could be attributed to blood pressure and heart attack medicines, which are taken by the 30 percent of adults in the U.S. who have hypertension. Since this data is just now being mined, much more research will need to be performed to verify the causes.

The data also shows variation in RHRs, with wide swings in heart rate being most common in young women and men over the age of 50.

The Role Of Obesity

Body-mass index (BMI) represents a person’s height and weight, but also their obesity level. As an individual’s weight increases, so does their RHR. Another surprise in the data was a higher RHR associated with low body weight. Therefore, it suggests there exists an optimal BMI for every person that allows their heart to operate most efficiently.

It’s no surprise that physical activity is good for the heart. Twenty minutes of exercise per day is generally recommended as a goal. But the data also show that the benefit of exercise tapers off after a couple hundred minutes per week, and results in no additional change in RHR. However, the data also show that exercise needs to be consistent for it to lower your RHR. Sitting all week and then running on the weekend will not, in general, lower your RHR.

Fitbit devices also track your sleep, and that appears to impact RHR as well. Getting enough sleep is good, but too much sleep is not. The data shows 7.25 hours of sleep per night is ideal for your heart.

Your Country Has An Impact

Fitbits are sold worldwide, and that allowed researchers to gather data from 55 countries with the most Fitbit wearers. Data was graphed with citizens’ activity levels on the horizontal axis and average resting heart rate on the vertical axis. Generally higher activity levels resulted in lower RHRs, but this chart produced some surprises as well. If you look at people who get approximately 55 minutes of activity per day, the RHR is around 62 in Costa Rica but almost 70 in India. Clearly other factors, such as BMI, eating habits, and genetics are having an impact.

Italy has some of the best numbers: 84 minutes a day of physical activity and a RHR of 61. Fitbit wearers in Pakistan showed the worst activity levels and high RHRs.

Pogue was most surprised by how life events impacted his RHR. When he started using a treadmill his RHR declined significantly. But other events, such as holidays and other times when family members get together, caused it to rise.

What Does This Mean For Trials?

While the data tells us a lot about RHR and the health of individuals wearing Fitbits, it may tell us even more about the future of clinical trials. Wearable devices such as the Fitbit and Apple Watch are becoming more popular. Therefore, requiring trial participants to wear them is less of a challenge for researchers. Higher grade wearables are also making their way into clinical trials.

The bigger question for those conducting trials is whether the data obtained from these devices is valid and interpretable. Dr. Roger Mills, who worked as both a cardiologist and a professor as well as spending time in the pharma industry, believes the devices hold potential for cardiology studies. Although the devices appear to have difficulty sensing atrial tachycardias and show some bias in heartrate measurements, the data appear to be useful for obtaining estimates of heartrate for activities and general exercise.

Big Data will open many doors for researchers performing trials, and the data generated by Fitbit is just beginning to show us the information we are capable of gathering on large patient populations.